Films@UM consists of over 800 digital videos on a wide variety of subjects which can be used in the classroom or independently. These films are available to University of Maryland (College Park) students, faculty, and staff for viewing, either from one's computer or classroom on campus, or at home via a virtual private network (VPN). Spanning documentaries, public television programming, taped performances, and feature films, Films@UM covers many areas of interest with significant concentrations in: 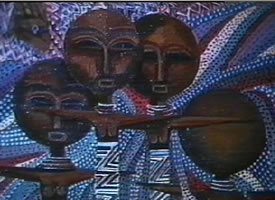 Focuses on Kenyan artist, Elizabeth Orchardson-Mazrui, whose art comments on life, particularly the contradictory attitudes of African society towards women.